Fox News: How Young is too Young to Get Married?

I had this link sent to me a while ago and thought it was interesting.

I'm a supporter of early marriage, because I believe young people who want to get married sooner have an incentive to mature more quickly, work harder, and reach a true adulthood. This is especially true for young men, who are encouraged to become financially stable earlier on by the desire to support a wife and family.

If you agree (or disagree) I would love to hear about it. You can comment or reach me through my email: thelogogirl@yahoo.com.

Thank you!
-Faye
Written by Jensine Burk at 10:05 AM No comments:

When I was a little girl in Virginia, I noticed that my parents didn't seem to have much fun and rarely ever used their imaginations. I always wondered why this was, but try as I might I could never come up with a reason. On further inquiry, I was informed by one of my parents that "when you get to be my age you start to lose your imagination." Lose your imagination??? Was such a thing even possible? All those poor grown-ups I knew had no imagination. I considered the depressing existence they must be forced to endure without it. What kind of miserable life must they lead?

The more I thought about it, the more I began to grow worried. Did all adults lose their imagination? If so, did that mean that I too would inevitably experience such a dreaded loss? I knew I couldn't keep from growing up but I resolved that no matter what it took, even if it killed me, I would be the only adult with an imagination.

From then on, when my imagination was not in use, I regularly felt the perimeters of my consciousness to make sure it was still intact, as a man afraid of dying at any moment might check his pulse.

At 12, the miserable age between childhood and becoming a young adult, my hypochondriac imagination became even more convinced that it would soon be severed from the rest of my psyche. From then on I used it more then ever. This was sometimes a good thing and sometimes not so good. Many of the inanimate things around me benefited, as I gifted them with names and personalities of their own. Undesirable consequences were relatively few, but present none the less. I slowly found new outlets like art, writing, and music composition. In August of 2011, at the age of fifteen-and-a-half, I started this blog as an incentive to use my imagination.

I had a new blog, GarageBand, a Photoshop program, a new bamboo tablet, and several available computers. There was only one thing preventing me from moving forward with the things I wanted to do. I was absolutely terrified of showing my work to anyone.

At the time I felt myself brave. I did hundreds of things most girls are afraid to do. I was almost never afraid of physical danger, but I had other fears. I was afraid of embarrassment, being unwanted, and unloved; being rejected by those I cared for most. It's the reason I wrote one of my first posts, entitled Fear, something I wrote solely for myself and no one else.

Hesitantly, I shared it with a few trusted friends, afraid of what they would think of my writing.   My blog has helped me with the fear of displaying my work, but it has taught an even more important lesson: Failure is a good thing. It's the way God strengthens us and pushes us in the right direction. Each time I fail or face rejection I learn from it and I come closer to success. I am using my imagination to do things I love, and even if no one appreciates it at first, I am honing my skills and outlets in the hopes that I will someday have something good.

I know that even if I face failure now, God can help me get past it and with a little imagination, I can hopefully work around it. I chose a name that I thought would adequately portray my lifelong quest for all things imaginative, as well as remind me of The Everlasting Creator.

So here I am rambling about nothing, on "Everlasting Imagination".

Click those. Go ahead. Try one. Right now. Just do it.

Now, was that so hard? All it takes is one click. Not only did you just make the little number change, but you exponentially increased my happiness. :) Thank you, thank you, thank you!!!
You didn't even have to follow the blog or sign in. It's the lazy, easy way to show you care.

So please, please click those little boxes when you read my posts. I really want to know what you think! :)

Thank you!
-Faye
Written by Jensine Burk at 9:56 AM No comments:

Sometimes, when I’m out in the cool air under the fall sky, I imagine what it must be like in heaven. My imagination falls so short, but I close my eyes, letting my fancies fly, painting brilliant pictures of things my earthly eyes will never see...

~~
I know there will be great beautiful mansions and a great city with streets of gold, but I imagine that I will spend most of my time outside, under the light of the sky. There I will glorify God by observing and marveling at some of His most magnificent creations made new, as no one on earth has yet seen them, untouched by sin or by flaw.

On the hills of Heaven will be hundreds of glistening flowers. Roses, lilies, sweet-smelling hyacinths of every shade and variation, each perfectly formed by the hand of the Creator, reflecting the light of His glory.

They will have no need of the sun, for night will never touch them and cold will never wither their petals. God will shine far brighter, warmer, and more life giving than the earthly sun. His radiance will replace the sun and His Breath will stir the leaves and blossoms like a soft, tender breeze.

The one's I love most, my family and friends, are surrounding me. The ones I lost, the one's who had abandoned or forgotten me are all there. With joy I realize, we'll never, ever be parted again!

But above all these beauties, these ecstasies of joy will be the absence of pain and heartache. God's warming light will cleanse the scars that my past heartbreaks have left on my soul. I don't have to fight anymore. I'm free from my sinful mind. Free from my earthly temptations.  There is no sorrow because He is my joy, no worry because He will provide, no loss because He is my everything, and no fear because He will protect me. All that is not joy will be, as tears, wiped away by the touch of his gentle fingers.

~~
My imagination flies so free and my heart's longing carries me so far that I almost believe I'm there...

...but I open my eyes and I'm back again. My vision of what lies around me is clouded by tears and heartache. Longing comes back, like the flood of droplets that are now rolling down my cheeks. I feel alone, afraid and hurt again, but now I realize...

...I'm still His child. He's still my joy, my provision, my protection, my hope, my peace, my strength, my Everything and though I can't see or feel Him, He is here. I know that the longing I feel is no different from that of my fellow believers, so I put on a brave face and keep going, sometimes for nothing else other than the hope that one day He'll rescue me. For now, I am blind to Him, but one day I'll see Him clearly. He'll guide my steps closer and closer, until the day I reach the end of my earthly journey and begin something new. 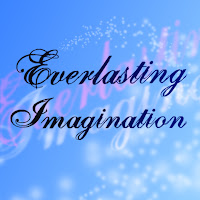 ~~
"The fact that our heart yearns for something Earth can't supply is proof that Heaven must be our home."--C. S. Lewis
Written by Jensine Burk at 5:08 PM 1 comment:

Check out Tori Wallace's new post, Sticky Note Forest a very well-written and creative piece which she wrote for her blog, (Thoughts from Hazel).
She requested help, so I did this illustration for her: 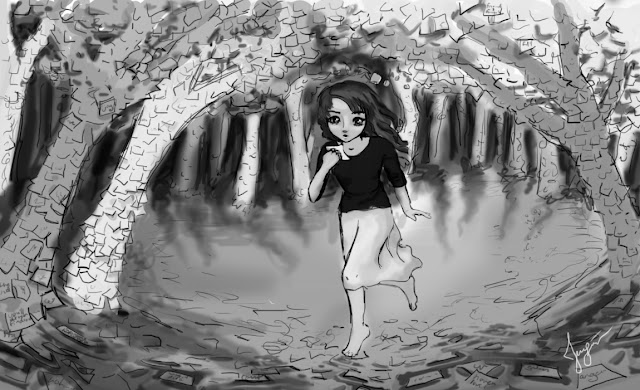 She requested a simple, black-and-white, anime-style sketch. It was fun to do! :) You can also find it on the Art, Logos and Design page on this blog.
Thanks!